A math pep rally is how my administrator described it. So true!

We had a blast hosting Dr. James Tanton yesterday. (Thanks to the USA Science and Engineering Festival and its sponsors for making it possible!) This was certainly the very first “math assembly” in the history of Richard Montgomery High School!

James is a bold man, facing a crowd of 800+ teenagers with only a pen and paper. But his charismatic style was captivating. The kids loved it and I’ve been hearing only good things from all my students.

He taught the whole crowd the national math salute and, right from the start, he had us entertained! 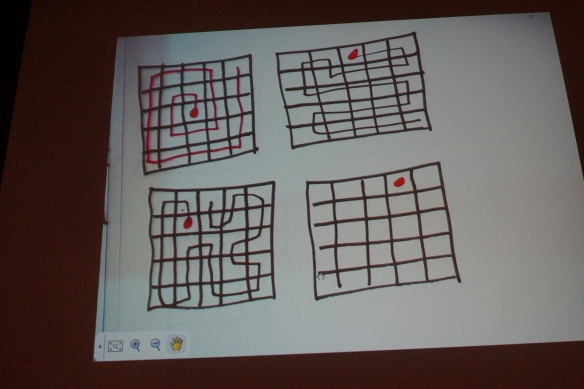 When he was a kid, James would lie in bed and look up at the tiles in his bedroom and create little mathematical puzzles for himself. He challenged us to solve his puzzles too, and invited a few students up to try their hand at it.

We proved an interesting result with James, and unlike most of my proofs, he got a huge round of applause from hundreds of teenagers :-).

James gave our students a real sense of what it’s like to be a mathematician and do mathematical research–it’s a lot like playing! He had the students’ complete attention throughout the assembly and kept them very interested as he walked them through some fun problems and encouraged audience participation. They clapped and cheered for him. Like I said, math pep rally! 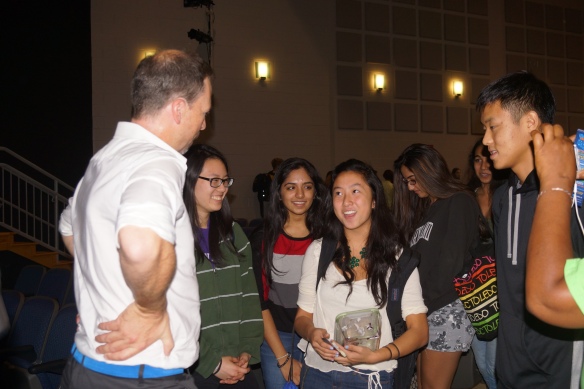 Afterward, James spoke with students who were enthusiastically bombarding him with questions, and he even got two autograph requests! (James = Rock star)

Afterward, some of the students and some math teachers had lunch with James. James got peppered with some more questions. Did you know his Erdős number is 3? Pretty awesome!

Thank you, James Tanton, for an awesome assembly!

3 thoughts on “The first RM math assembly ever”